Written when he was only seventeen years old and a student at the Curtis Institute of Music in Philadelphia, Samuel Barber’s “The Daisies,” from Three Songs, Op. 2, features a simple, lyrical vocal line set to a charming text by James Stephens. While this song was composed early in Barber’s career, it displays the lyricism that would later become the hallmark of his compositional style, particularly in his songs.

It is very likely that Barber was introduced to the poetry of James Stephens through his uncle, Sidney Homer, who was also a composer. Homer, in fact, set Stephens’s “The King of the Fairy Men” (from Songs of the Clay; London and New York: Macmillan, 1915) in his own collection of Seventeen Songs (New York: G. Schirmer, [1917] 1943). Stephens’s poem “The Daisies” first appeared in Songs of the Clay, but was later published in his Collected Poems (1926), which was probably the source Barber used for the text.

“The Daisies” was published by G. Schirmer in 1936 as the first of Barber’s Three Songs, op. 2. It is followed by “With Rue my Heart is Laden” (text by A. E. Housman) and “Bessie Bobtail” (text again by James Stephens). Although “The Daisies” was dedicated to Barber’s mother, Marguerite McLeod Beatty Barber (who was called Daisy), it received one of its earliest hearings by his aunt, Louise Beatty Homer, who would become one of the leading contraltos of the Metropolitan Opera. The song was also championed by Rose Bampton, one of Barber’s classmates at the Curtis Institute of Music and also a Metropolitan Opera singer.

While the charm of “The Daisies” lies in the combination of the graceful melody with the asymmetrical textual underlay, the holograph manuscript suggests that Barber initially favored a more dissonant opening melodic phrase. Perhaps at the suggestion of his composition teacher at the Curtis Institute of Music, Rosario Scalero, Barber removed the accidentals prior to publication to form the song’s diatonic opening. Scalero may have also suggested the revision to the piano introduction; instead of the strict chords found in the holograph manuscript, the introduction in the published version mirrors the more graceful contour of the melodic line.

Barber’s “The Daisies” proves a worthy addition to a singer’s repertoire.

The Daisies
by James Stephens

In the scented bud of the morning O,
When the windy grass went rippling far!
I saw my dear one walking slow
In the field where the daises are.

We did not laugh, and we did not speak,
As we wandered happ’ly, to and fro,
I kissed my dear on either cheek,
In the bud of the morning O!

A lark sang up, from the breezy land;
A lark sang down, from a cloud afar;
As she and I went, hand in hand,
In the field where the daisies are. 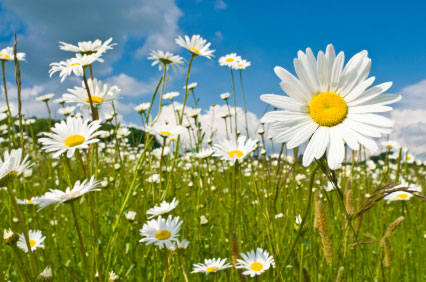