Despite Stevens's inclination towards abstraction and intellectualism in his poetry, his verses are considered by many critics as some of the best and most characteristic of 20th-century American poetry. Stevens felt "that the poet's purpose was to interpret the external world of thought and feeling through the imagination." (Poetry Foundation)

Born in Reading, Pennsylvania, Wallace Stevens was a brilliant student from a young age, with great support from his parents, who owned an extensive library. After finishing high school, Stevens began to study at Harvard, writing prolifically for several Harvard publications before leaving the university in 1900, before he could finish his degree, due to financial hardships at home. Stevens moved to New York City and worked for New York Evening Post. During this time, Stevens discovered that life as a journalist was boring for him and used his time in New York to explore the city and attend theatrical and musical events.

At the suggestion of his father, Stevens then pursued a career in law after leaving his journalist post. Though he knew that he wanted to continue to write literature, Stevens was practical and graduated from the New York School of Law in 1903. Stevens spent the rest of his life working in insurance law, beginning this new phase of his career in New York. He proposed to Elsie Viola Kachel, and the two were married in 1909. However, his father’s death the same year, as well as his mother’s death in 1912, were significant events in Stevens’s life, and he did not write poetry again until 1913, though he did participate actively in the artistic community of New York.

Stevens began publishing poems again in 1914, and, in 1916, Stevens left New York to work in Hartford for the Hartford Accident and Indemnity Company, where he remained employed for the rest of his life (becoming vice president in 1934).

The main output of Stevens poetic and literary work came at an advanced age, unlike most poets, and also (contrary to most artists), Stevens was stimulated to write even while maintaining a full-time career in insurance.

In 1923, when Stevens was already 44 years old, his first volume of poetry, Harmonium, was published, demonstrating the influence of French Symbolism and English Romanticism on Stevens, while still maintaining an American flair. Interestingly, his verses often discuss music as well, such as “Peter Quince at the Clavier.” While many poems are serious, he does include a mock epic (“Comedian as the Letter C”) as well as a parody / answer to T. S. Eliot’s “The Love Song of J. Alfred Prufrock” (“The Monocle de Mon Oncle”). However, despite the importance that this volumes holds for American poets today, Harmonium was given little critical attention. For the nine years following this volume, Stevens stopped writing, due to the birth of his daughter in 1924.

After beginning to write again in 1933, Stevens published Ideas of Order in 1934, his second collection of poetry (which he revised and published again the following year in an expanded edition). Ideas of Order, a darker and sparser volume than Harmonium, addresses the issues of aging and dying. Ideas of Order brought Stevens a great deal of critical attention, both positive and negative, as many identified him as a unique poet.

Stevens’s next volume, Owl’s Clover, was published in 1936, but immediately withdrawn. He edited and republished the volume the next year as The Man With the Blue Guitar, using the blue guitar to represent the power of the imagination of the poet (things sound different when played on the blue guitar, but the poet is still playing them “as they are.”)

In Stevens’s following volumes, Parts of a World and Notes Toward a Supreme Fiction, Stevens writes at length about poetry using poetry, the latter volume comprised of a long poem considered by many critics to be “the greatest poem on the nature of poetry” (Poetry Foundation).

Stevens published two more volumes of poetry (Transport to Summer in 1947 and The Auroras in Autumn in 1950) in his lifetime, followed by his prose work The Necessary Angel, which explains his views on poetry and the imagination, providing a backdrop for his poetry.

At the end of his life, Stevens was one of America’s greatest contemporary poets, though he did not abandon his career in insurance law. The publication of The Collected Poems of Wallace Stevens in 1955 won Stevens the Pulitzer Prize for Poetry and the National Book Award. He died of cancer in August of 1955. 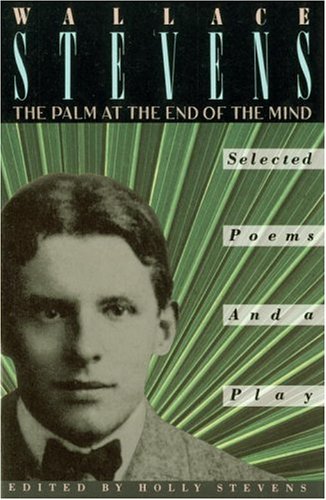 The Palm at the End of the Mind: Selected Poems and a Play The Necessary Angel: Essays on Reality and the Imagination

A Child Asleep in Its Own Life

A Clear Day and No Memories

The Dove in Spring

The Planet on the Table

The River of Rivers in Connecticut